[Fall 1931] About a year and a half after we were married, Paul came home from town, popped into the kitchen where I was working, and said, “We have our baby!” I clasped my hands over my bulging pregnant waistline and said, “What on earth are you talking about?”

He opened the door again and in bounced the friskiest pup I’d ever seen. We both laughed at once. He tilted his head at an angle which seemed to say, “Come on! Let’s have a little fun!” His name was Pal.

Grandma was a very proper lady barely five feet tall with tiny hands and feet and a slender waist. I doubt that she ever weighed much more than a hundred pounds. She was always properly groomed from the soles of her well-shod feet to the crown of her perfectly arranged hair. She used to say, “Cleanliness isn’t next to Godliness. Cleanliness is the more important!”

END_OF_DOCUMENT_TOKEN_TO_BE_REPLACED

On the morning of her wedding day Mildred asked me to go with her to get the flowers that friends had told her she might have from their gardens, and to gather fern-like asparagus foliage to use in the bouquets we would make. How lovely our house looked! In my imagination, I saw my pretty sister standing amid those beautiful bouquets, promising to love, honor, and cherish Harry Pickett.

END_OF_DOCUMENT_TOKEN_TO_BE_REPLACED

All was not well with the world the year of 1918. War had drained America of her finest young men. The flu killed more people than the war. I was five years old.

Ted was the first to come down with the flu; then Henryetta, Frank, and I quickly followed. The danger that we might die was very real. We were so scared.

END_OF_DOCUMENT_TOKEN_TO_BE_REPLACED

The story by Jodi Rogstad, Asst. Managing Editor/Features of the Wyoming Tribune Eagle, dated April 27, 2015, is of interest to anyone with ancestry who traversed the Oregon Trail between 1850 and 1870. Many thousands died along the trail and were buried in unmarked graves or marked graves whose markings have degraded to the point of unrecognizable. This is the story of one such grave – but with a twist – this grave may hold the bones of a well-described person and her place and fashion of burial – so well described that this may indeed be the final resting place of the body of Anne Roelofson Scott, mother of two famous early Oregonians: women’s suffrage crusader, Abigail Scott Duniway; and first editor-in-chief of the Oregonian, Harvey Whitefield Scott.

When Thomas Roelofson (1825-1897) was six-months old, his mother Mary, went back to her old home in Kentucky for a visit. She traveled by horseback alone, except for the baby, Thomas, whom she carried before her on the saddle, guiding the horse with her free hand.

Lawrence’s home was always open to ministers. At the time of the Meteoric Shower (in 1832), a number of neighbors flocked to his house in fear.

About 1835, Mary, climbing a fence with a bundle of yarn she was taking to a loom to be woven, fell and broke her right leg just above the ankle, and was bitten on the leg by a sow, which became infected and would not heal. She was bedfast, suffering great and constant pain for about 7 years. Gangrene finally made amputation necessary. The operation was performed at the hands of an unskilled doctor and crude instruments, no anesthetic. Three operations were performed before it would heal. Young Thomas witnessed his mother’s agony and vowed revenge on the Doctor when he grew up, but the doctor died before he could carry out his threat.

Mary was described as of low stature, blue eyes, and of light complexion and red hair. She loved her home, used crutches when walking any distance after her injury. She did her housework with leg resting on a chair, which she shoved along so she could have it handy when she stopped.

“I have walked with her many times, carrying her knitting bag. I saw her for the last time in 1862; she was blind and feeble.” (Handwritten note in the Oregon State Archives, author unknown)

From Ancestors of Robert Carl Cook, by K. B. Cook

The best information of the Lee family is that three brothers came from Normandy, France, with William the Conqueror in the year 1066. Their Norman name was DeLei and was Anglicized Lee.

Intervening history is too lengthy for recital in this paper. Joseph Lee, related to the Revolutionary Lees, was born in Cape May County, New Jersey, about 1781. When some 30 years of age he married Amy Lunbeck. In 1817 with their first child Jonathan Johnson Lee they moved to Pike county, Ohio, where were born Nicholas, Richard, Joseph Dunn Bradford and several daughters.

END_OF_DOCUMENT_TOKEN_TO_BE_REPLACED 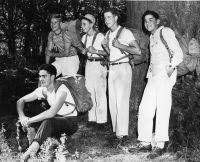 It was June 9—day for the realization of several weeks of planning when five McMinnville high school boys set off on the first lap of a proposed 105-mile hike down the Oregon coast. The five, Malcolm March, Jim Hart, Dick Bennette, Joe Jensen and Dick Muhle, planned stops all along the stretch of sand, trees, rain and ocean between Ocean Lake and Reedsport and they intended to make the trek within 10 days.

END_OF_DOCUMENT_TOKEN_TO_BE_REPLACED

As told by Anne Kemp Gowdy

When I was about ten years old – 1853 – there was no school near where we lived in Salem, Oregon. So I went to stay with my married sister, Mary, or Mollie, as we called her. She was living somewhere near the Santiam River. END_OF_DOCUMENT_TOKEN_TO_BE_REPLACED

As told to Elsie Odell Bennette by Beth Gowdy

When my Grandmother, Sally Newbill, was preparing for her wedding in 1828, the most of her outfit was made, spun and woven by her own hands. END_OF_DOCUMENT_TOKEN_TO_BE_REPLACED

from the diary of Ruby Tuggle END_OF_DOCUMENT_TOKEN_TO_BE_REPLACED

As told to Elsie Odell Bennette by Beth Gowdy about her mother, Anne Kemp Gowdy and her grandfather, John Glenn Newbill.

John Glenn Newbill of Virginia was a slave owner but his slaves were well treated. When his daughter, Sarah, and her husband, Riley Kemp, moved to Pettis County, Missouri, he gave her a couple. END_OF_DOCUMENT_TOKEN_TO_BE_REPLACED

As told by Beth Gowdy about her grandfather, Riley Kemp.

Riley Kemp was sheriff of Pettis County, Missouri, for eight years. Once before an election he and the other candidate made a friendly bet that the one who lost would give the other one an overcoat. END_OF_DOCUMENT_TOKEN_TO_BE_REPLACED

END_OF_DOCUMENT_TOKEN_TO_BE_REPLACED

As told to Elsie Odell Bennette by Beth Gowdy about her father, John Tucker Gowdy.

The summer of 1862, John T. Gowdy and a friend went north to Canada to hunt for gold. They had very little success, but John did bring home a very small amount of gold dust.

END_OF_DOCUMENT_TOKEN_TO_BE_REPLACED 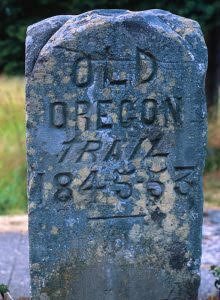 Personal Recollections of the Journey to Oregon in 1852, by Mrs. J. T. Gowdy (Anne Eliza Kemp) of McMinnville.

I was born Nov. 23, 1843, in Pettis county, Missouri, near where the city of Sedalia now is, but there was no city there then, the county seat, Georgetown, was the nearest town from where our farm was.

END_OF_DOCUMENT_TOKEN_TO_BE_REPLACED

As told to Beth Gowdy by her mother, Anne Eliza Kemp Gowdy

When I was ten years old, we lived for about a year in a little log cabin in Polk County, near where Fort Sheridan stood. Ever since we had been in Oregon, we had lived in Salem, and had near neighbors with children to play with me. This was a lonesome place, no houses in sight and no near neighbors.

END_OF_DOCUMENT_TOKEN_TO_BE_REPLACED

I was six years old in November, 1849. The next spring I went to school for the first time. We were living on a farm, near where is now the city of Sedalia, Missouri. My teacher was Mrs. Ferguson. She taught, or kept school, as we said then, in her home.

END_OF_DOCUMENT_TOKEN_TO_BE_REPLACED

As told to Elsie Odell Bennette by Beth Gowdy. Bellpassi was a little town, that was moved to be by the railroad and its name changed to Woodburn. Before that Mr. Brown had the station for the stage stops between Oregon and California. Mrs. Brown cooked for the passengers. The horses were changed there and my father cared for them, and made trips back and forth to Portland.

END_OF_DOCUMENT_TOKEN_TO_BE_REPLACED

As told to Elsie Odell Bennette by Beth Gowdy about John Tucker Gowdy on the Oregon Trail in 1852.

Your great grandfather, John T. Gowdy, was only seventeen years old when he crossed the plains in 1852 by ox team. By the time he was telling this story to his children, he had forgotten the name of this river.